Grandmaster Beaudoin began his Tang Soo Do career in 1962 while stationed in the U.S. Air Force in Osan, Korea and training under Grandmaster J C Shin. He earned his 1st Degree Black Belt on May 12th, 1963 at a test in Inchon Korea. His Dan number is 005661. His studies in Korea were the beginning of a life-long commitment to Tang Soo Do. He has taught thousands of students in the Waterbury area for more than thirty-five years and has promoted over three hundred Black Belts and ten Masters. Grandmaster Beaudoin teaches many of his own classes including Tiny Tigers, Little Dragons, Advanced Children and Cho Dan Bos, as well as the Black Belt Excellence class. Of his teaching he says “My favourite part of Tang Soo Do is Teaching the Karate Kids programs, the Tiny Tigers And Little Dragons classes. I also enjoy contributing to the International Black Belt Clinics following the World Championships.

I will continue to train and serve in the WTSDA as long as students express the desire to learn, as long as people want to improve, wherever people yearn to reach their potential. The rewards coming to me can be seen in their eyes. There is no price on the value of a facial expression showing appreciation, gratitude and joy that comes from teaching another. One of my goals is to complete a Karate Kids Manual for our Association. Another is to continue promoting the practice of Ki Gong for health purposes to our elder population. In general, I would like to use our martial art skill and knowledge to foster healing and general wellbeing.” 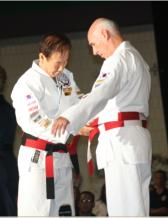