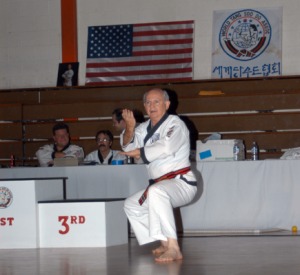 Grandmaster William R. Strong, Pal Dan, or 8th degree black belt, received his current rank of Kwan Chang Nim at the World Tang Soo Do Association World Championship on July 19, 2014. Grandmaster Strong began training in 1964 in Austin, Texas at the Jhoon Rhee Institute of Tae Kwon Do. Grandmaster Jhoon Rhee was on the test panel for his first exams.

After moving to Alabama, he studied Tae Kwon Do for another ten years and achieved the Sam Dan rank. In the early 1980’s, he became a member of the US Tang Soo Do Association and eventually received his Sah Dan Masters rank. Around the mid-1980’s he joined the World Tang Soo Do Association and Tang Soo Do has been his core martial arts since that time but over the years he has also studied Hapkido, Aikijitsu, Aikido and Shotokan.

Grandmaster Strong now operates the North Alabama Tang Soo Do studio in Florence, Alabama. His family also train with his wife holding the rank of Cho Dan and daughter’s Rita having E Dan and Morgan having the rank of Sam Dan. 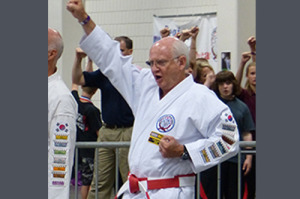 Grandmaster Strong has travelled to many WTSDA regions and taught at seminars, clinics and Black Belt camps. These have included regions in the United States as well as Europe, South Africa, Mozambique and Costa Rica (which he has visited 6 times in the past few years)

Some quotes from Grandmaster Strong:

“If one trains long enough with the understanding that there is always more to learn, then the concept of “Do” or way of life becomes ingrained in daily thoughts and activities. It is the quest to learn more, to live a healthy life, and to be prepared for all of life’s situations that I continue to train.”

“Enjoy learning and take advantage of the knowledge and skills you can learn from your instructors and peers.”